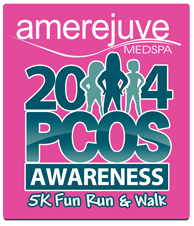 Join us for prizes, music, community, and fun to support women with PCOS!

5k Champ: Women with PCOS are Beautiful
Yaixa Episcopo came all the way from Chicago to be the first place female runner in the 2013 Amerejuve PCOS Awareness 5k on September 28th. Her journey truly started, however, when she was diagnosed with PCOS at age 19.

Polycystic Ovarian Syndrome affects an estimated one in ten women and is linked to infertility, weight gain, and increased risk of stroke, diabetes, and other life-threatening conditions. In 2011, at 5’2" and 196 pounds, Episcopo decided to make a change. Two years and 72 pounds later, she’s a 5k champion.

Read the full story in our October 2013 Amerejuve Insider. Amerejuve Medspa and Cosmetic Surgery again teamed with the PCOS Foundation to raise awareness of Polycystic Ovary Syndrome. More than 400 participants braved the rainy weather to run and walk to raise awareness for PCOS on September 28th at the Houston Downtown Aquarium, including a team fielded by Amerejuve and its partner company, Amerefit Weight and Wellness. The event was a day of celebration and support of women who fight PCOS, including a gift from Amerejuve for PCOS Advocates.

Amerejuve, Houston’s #1 MedSpa, announced its title sponsorship of the PCOS Foundation’s awareness 5k. Polycystic Ovarian Syndrome affects an estimate 1 in 10 women, with about half of those in the U.S. going undiagnosed. PCOS is linked to a number of symptoms, including infertility, weight gain, excess hair growth, abdominal fat, thinning hair, and elevated risks of diabetes and stroke. Amerejuve is proud to partner with the PCOS Foundation to promote awareness of the disease, increased diagnosis and management rates, and to provide services to assist women with the visible symptoms of the disease. The event was held on September 23rd, 2012 at the Houston Downtown Aquarium and had an estimated 600 participants.