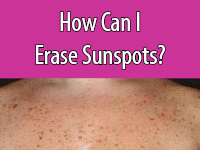 Sunspot and Spider veins are irritating signs of age, but Amerejuve has the power to erase them. While the Syneron-Candela GentleYAG and GentleLase are most well known for laser hair removal, these medical lasers have other applications as well. With a few minor setting adjustments, they can be used to treat sunspots, spider veins, freckles, and other hyperpigmentation.

Spider veins are venules that have become enlarged and become visible beneath the skin. They can be blue, purple, or red in appearance, and having a branching, jagged shape.

After a treatment with an Alexandrite laser (the GentleLase at Amerejuve), the vein will lighten and fade over the following weeks. The laser causes the blood in the vein to coagulate, sealing off the vein. Once the body recognizes the vein is no longer functioning, it will naturally break up the vein and absorb the cells. Depending on the number and size of the spider veins, it may take one to three treatments to get the desired results. And while the treatment does fade existing spider veins, it will not prevent the formation of new ones. However, any new spider veins can be treated in the same way.

Sunspots, freckles, and other hyperpigmentation usually occur in areas that have the most sun exposure, such as the face, hands, shoulders, and chest. For these discolorations, one treatment option is the GentleYAG laser.

To treat sunspots, the laser targets the pigment in the top layer of skin, or the epidermis. The treatment will cause the spot to initially darken, form a “frost” or “crust,” and then shed the crust and gradually fade. It may require two to three treatments to get full results.

With this treatment, post care is especially important, and the area must be well protected from the sun for at least two weeks. This treatment can treat skin tones from one to three on the Fitzpatrick Scale, meaning the lighter end of the scale, including Asian skin.

Also, if the discoloration is raised or might otherwise indicate a risk for skin cancer, it should be examined by a dermatologist.